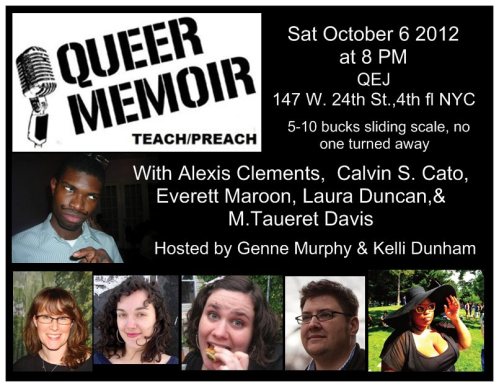 QUEER MEMOIR is NYC’s community based queer storytelling event. This month we’ll be hearing from a bunch of really fascinating folks with amazing stories, all on the theme of NERD. Please join us. The suggested donation is 5-10 bucks to cover costs, but if you want to come and and don’t have the cash PLEASE just come anyway. No one ever turned away.

Genne Murphy (one night only from San Francisco)
Kelli Dunham

Alexis Clements is a playwright and journalist based in Brooklyn, NY. She is currently a Fellow at the Cultural Strategies Initiative. Her creative work has been produced and published in both the US and the UK. She is the co-editor of the two-volume anthology of performance texts by women titled, Out of Time & Place, which includes her performance piece, Conversation. Her articles, essays, and interviews have appeared in publications such as Bitch Magazine, The Brooklyn Rail, Nature, and Aesthetica. She regularly writes about art and performance for both Hyperallergic and The L Magazine. www.alexisclements.com

Calvin S. Cato got his comedic start with the Wesleyan University stand-up comedy troupe Punchline, then transferred his unique brand of humor to New York City in 2006. He’s performed in comedy clubs, off-Broadway theaters, coffee houses, the backs of bars, and even a beauty salon. He appeared on the Game Show Network, showcased on QPTV, performed on the critically acclaimed Naked Comedy Show, and produced an unemployment/recession-themed comedy show at Comix Comedy Club from 2008 to 2010. He has also been favorably reviewed in The Examiner, The Collared Sheep and Inside New York. In 2011, he was a featured act in the North Carolina Comedy Arts festival and was a warm-up comic for the 1st Annual Funny Girls in Film Festival. He was a part of the 2012 Out of Bounds Festival in Austin, Texas. Come catch a high-energy act that promises to never be the same show twice!

Everett Maroon is a memoirist, humorist, pop culture commentator, and fiction writer. He has a B.A. in English from Syracuse University and went through an English literature master’s program there. He is a member of the Pacific Northwest Writer’s Association and was a finalist in their 2010 literary contest for memoir. Everett is the author of a memoir, Bumbling into Body Hair, published by Booktrope Editions, and has a short story, “Cursed,” in the anthology The Collection: Short Fiction from the Transgender Vanguard, forthcoming from Topside Press. He has written for Bitch Magazine, GayYA.org, RH RealityCheck, and Remedy Quarterly. He will be writing for Original Plumbing in 2012 on popular culture and trans civil rights. He has had short stories published by SPLIT Quarterly and Twisted Dreams Magazine. Everett lives in Walla Walla, Washington, with his partner and baby son. He is originally from Hightstown, New Jersey, graduating from McCorristin Catholic High School.

Laura G. Duncan is a lecturer and researcher whose work focuses on issues of stigma and social inequity within medicine. She has taught sexual health education in a variety of venues and for the last three years has performed a multimedia research presentation about the intersection of robotics and issues of sexuality and the body. She currently works in clinical substance abuse research and serves as a full-spectrum doula with The Doula Project. www.lauragduncan.comwww.lauragduncan.com .

Genne Murphy
Genne Murphy is a San Francisco based playwright and co founder, with Kelli Dunham, of Queer Memoir.

Even as LGBT characters and “out” celebrities become more common in pop culture and mainstream media, the richness and complexity of real queer lives is still undervalued and often invisible. Queer Memoir attempts to provide an avenue to share queer lives and celebrate the ritual and community-building value of storytelling. 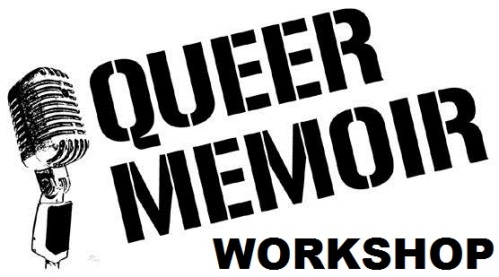 Have you been wanting to share at Queer Memoir but feel unsure how to put together your story?

No problem, we’ll work on it together.Bring your notes and thoughts and we’ll scheme both as a group and later, one on one, to

-Find the narrative arc (every good story has a beginning, middle and end)

-Figure out the best way for you to share you story (read from a prepared draft? read from notes? tell spontaneously? )
-Talk about dealing with performance anxiety and other discomforts.

Time and place TBA, but most likely in Brooklyn (Prospect Leffert Garden) between 2 and 4 pm. Date is Saturday October 6th.

The idea is that you’ll come away with a story ready to share at Queer Memoir, and we’ll book you for an upcoming show.

If that doesn’t happen, that’s cool too, we can keep working with you.

Or you might decide you’re not ready yet. That’s cool too.

Anyway the point is we WANT to HEAR YOUR STORY.

Please share this like, eight million times and bug your friends who might be interested but need encouragement. We’re going to be doing massive outreach, but TELL US who Queer Memoir is leaving out and we’ll try and find those people.

Email queermemoir@gmail.com with questions, interest or concerns, complaints, or just a good recipe for homemade pesto.